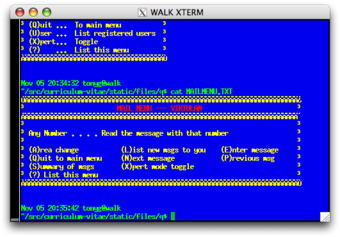 Perhaps the most sophisticated Pascal program I’ve written to date, BBS3 was a multi-user bulletin board system that ran on my old 286 PC running DOS.

It was written in 1992, predominantly in Turbo Pascal 6 with a smattering of assembly language. It incorporated serial-line driver code I found somewhere on the ‘net and encapsulated, and used a cooperative multitasking system (which is where the assembly came in) to permit multiple concurrent logins, both via modems and via the local console. It had an online chat feature, a tiny ANSI interpreter for the local console, and I even implemented the XMODEM protocol for file downloads!

Because at the time the modem had to share the family phone line, the system never had more than five users (one of whom was my twelve-year-old sister), so it’s of historical interest at best.

The code is here: bbs3.zip

Unfortunately, I no longer have a copy of TP6 (or, for that matter, of DOS), so the code hasn’t been compiled or run for a long time now.