This page is a mirrored copy of an article originally posted on the LShift blog; see the archive index here.

RabbitHub is our implementation of PubSubHubBub, a straightforward pubsub layer on top of plain old HTTP POST — pubsub over Webhooks. It’s not well documented yet (understatement), but that will change.

The PubSubHubBub protocol specifies some RESTful(ish) operations for establishing subscriptions between message sources (a.k.a “topics”) and message sinks. RabbitHub implements these operations as well as a few more for RESTfully creating and deleting exchanges and queues.

Combining RabbitHub with the AMQP protocol implemented by RabbitMQ itself and with the other adapters and gateways that form part of the RabbitMQ universe lets you send messages across different kinds of message networks — for example, our public RabbitMQ instance, dev.rabbitmq.com, has RabbitHub running as well as the standard AMQP adapter, the rabbitmq-xmpp plugin, and a bunch of our other experimental stuff, so you can do things like this: 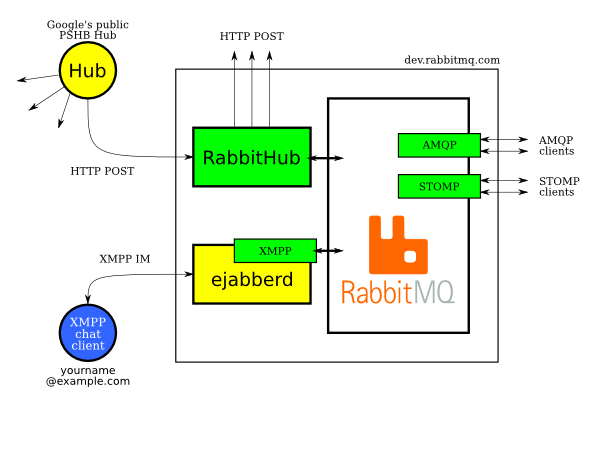 RabbitHub is content-agnostic — you don’t have to send Atom around — so the fact that Atom appears is an artifact of what Google’s public PSHB instance is mailing out, rather than anything intrinsic in pubsub-over-webhooks.

[...] PubSubWebRabbitHubHook. Aside from the lack of HMAC authentication, I really like where PubSubHubBub is going, and the ease of letting RabbitMQ do the hard bits. [...]

This article is a little short. I would have liked to see a little more explanation to fill things out a bit more.

[...] with RabbitHub July 1st, 2009 admin Leave a comment Go to comments PubSub-over-Webhooks with RabbitHub. RabbitMQ, the Erlang-powered AMQP message queue, is growing an HTTP interface based on webhooks [...]

[...] PubSub-over-Webhooks with RabbitHub « LShift Ltd. RabbitHub is our implementation of PubSubHubBub, a straightforward pubsub layer on top of plain old HTTP POST — pubsub over Webhooks. It’s not well documented yet (understatement), but that will change. [...]

Great write up. Does RabbitHub follow Google’s spec of PubSubHubbub draft 0.1? or its own derivative?

@ryan: thanks! I’ll be writing more in future to help explain things better.

@peter: Yes, it follows the spec. It only implements the receiving and sending sides though: it doesn’t implement any of the Atom-specific parts, including the ping protocol. It also implements a couple of small extensions (undocumented, as yet, like the rest of the system :) ).

I’ve updated the README at http://github.com/tonyg/rabbithub with the contents of this article as a start on some documentation; more to come.

I built an app to generate an atom feed, and figured out how to set up an exchange on dev.rabbitmq.com. The hardest part was figuring out how to subscribe using Google’s PubSubHubbub hub. I am happy to say that I can now get a XMPP message whenever I add an item to my feed!

Unfortunately, I seem to be getting some duplicates. I may have subscribed more than once…